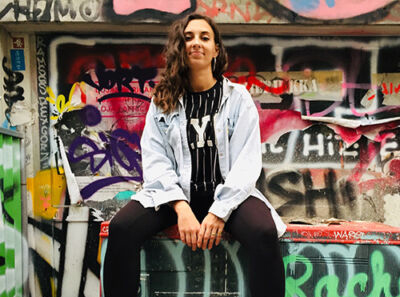 Angélique Rochemont also known as Angie was born and raised in France between Paris and Marseille.

Showing a tremendous passion for dance at an early age, Angie quickly became sensitive to the energy, aesthetics and culture of street dances.

Fascinated more precisely by the Hip-Hop social dances also known as “Party Rock “or  “Hip-hop freestyle”, she dedicated a lot of time practicing and learning mainly from pioneers of the different styles. Since 2006 she tested her skills in numerous competitions (Solo/Group) in which she had substantial successes.

Founder of the Hype N hop dance company, she trained dancers of all ages, choreographed and directed groups for performances ( Hype N hop Festival, D-CAF & 2 be continued – on hold due to Covid19).

Marlies Van Coillie was born and raised in the city of Ghent, Belgium. Dance was part of her early vocabulary, that was especially influenced by the culture of street dances and hip hop music through her older brothers.

At a young age, she was schooled in funk and streetdance, by which she was involved in dance performances. She later also for a year learned jazz that overlaps in social street dances with hip hop, thinking for example of the charleston.

Attracted mostly to hip hop freestyle as an adolescent, she was mostly active in social street dances during night life. Based in Cairo since three years, she has re-connected this passion again by following classes in hip hop. Together with her dance partner Angie Rochemont, she has founded the hip hop dance crew Melt-O.