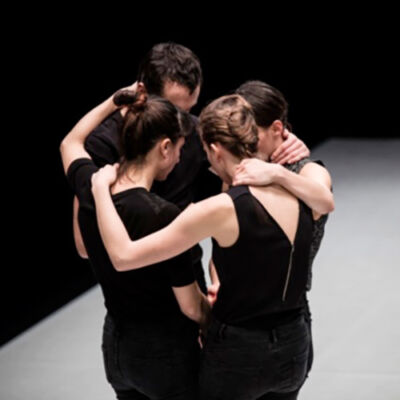 It’s a four-body round. These are four bodies linked by reciprocal and returning gestures. It is a circle where the faces, the backs, the movements turn, like a frieze of time on the surface of a vase. The round is the space that time takes to change a body into another body.

Each body unfolds in the body following the dance of a common body around a hole of memories.

The score of La Ronde presents itself as a strange watchmaking, made of unison and canons that do not follow the rhythm of a measure but the appearance of an agreement , respiratory harmony that binds bodies and sustains their impulses.

The time of the round is not a number but a fluid, it flows from body to body like living matter, a roll between the already and the still, a duration lived in the transfers of the weight. A race is projected ahead of a suspended step.

A movement expires far after the arrival of the gesture. The time of the round is disengaged: depending on whether they go in unison or in cannon, the figures launched in the round turn faster or slower than the passage of the bodies in the series of gestures. Sometimes I even seem to see them backwards, like the wheels of vehicles turning upside down in the cinema.

A matter of the speed of the eye, no doubt. Dance, I can be content to keep my eye on it when I follow the spatial evolutions of a body. But I can also have it in my eye, when my gaze anticipates or delays the mobiles, launches accelerations in the pauses, retains steps in the flows, when the round shows me that seeing is a dance. So she raises a cloud of virtual movements in front of current gestures, which I emulate or simulate in the intoxication of metamorphoses; a round of epiphanies that I dance in addition to the round that I see.

Yasmine Hugonnet is a choreographer, dancer, and researcher, born in Montreux in Switzerland in 1979. From 2 to 6 years old she lived in Mali. Back in Switzerland she started dancing ballet and at fifteen moved to contemporary dance. She studied at National Superior Conservatory of Dance in Paris, interested by contact improvisation, Butoh and composition. In 2000, after few months in New York (Trisha Brown, Movement Research workshops…) She started creating in the frame of the collective of artists Synalephe, exploring various frame of performances, site specific, interactive pieces, video works, and a practice of dance and performances with visually impaired persons, spending two years in Taiwan.

As she looked for a more critical context, she moved to The Netherlands joining a Master Degree in Choreography called “Dance Unlimited” program (2003-2005); half practice and theoretical based master degree, she researched upon the notion of “Presences” in performances, studied Butoh and Laban Movement Analysis. In 2006, Laureate of MapXXL program by European Pepinnières for Young Artists, she went to Ljubljana Slovenia for an artist residency where she collaborates with various artists and institutions (En Knapp, Maska, Plesni Theater). With a focus on embodiment and vision, she created RE-PLAY (2006) a trio that was invited at Impulz Tanz (8: Tensions) Festival in Vienna, Tanzhaus NRW Dusseldorf, Gibanica Slovene Dance Platform in Ljubljana. Then Latitudes de Pose (2007), a solo that has been presented at Mladi Levi Festival Ljubljana,Of Other for the City Museum in Ljubljana and a group piece AAAAA , Solo for four voices, (2008-2009) that co-produced by Maska Sovenia and Tanzhaus NRW Düsseldorf.

In this period she developed her dance language with a focus on the relation between postures, attention and imagination. Deepening her understanding of the movement of attention, the germination of figures, the idea of ​​Postures as containers; within her processes she developed a practice of ventriloquism. Her work has been oriented by few important encounters such as Peter Goss, Odile Rouquet, and Lisa Nelson.

In November 2018, she will create a new piece for three dancers, CHRONOLOGICAL, that is presented and coproduced by Théâtre de Vidy, Lausanne and Atelier de Paris CDCN in January 2019.

The Company Arts Mouvementés is based in Lausanne and supported by City of Lausanne and Canton de Vaud for a 3 year program.