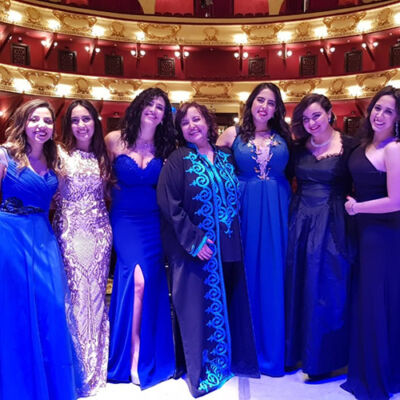 Fabrica started its activities in 2011 Fabrica started its activities in 2011 with the performance of the opera “The Magic Flute” by the Austrian author Mozart and directed by one of the founders of Fabrica, the operatic director Mohamed Abu Al-Khair, after it was translated into Arabic by Dr. Sarah Anani and Dr. Nevin Allouba, and it presented through its successful performances on The Bibliotheca Alexandrina theater that presented a new generation of opera singers after their training and developing their talents.

In 2013, Fabrica presented the musical Les Miserables after being translated into the Egyptian language by Dr. Sarah Anani, which was presented as the first graduation project from the new “Musical Preparation” section. Training Dr. Nevin Allouba, directed by director Muhammad Abu al-Khair ….

then presented in the El-Sawy Cultural Wheel and in the T.V program “Al-Bernameg” with Basem Youssef

In January 2014, the United States Embassy invited Fabrica to tour 4 US states, including Washington, New York, Boston, and Vermont And over the years, Fabrica was invited to appear in several important television programs, such as the program “Sahebat Al-Saada” with Issad Younes … and the program “Ent Hor” with Medhat Al-Adl … and the program on “Sharif’s Street”, the program of Mona El-Shazly, and the program “Hona Al Qahera”

by Ali Orbit. And the successful program “SNL Arabic” and appeared in the series “In Family Size” with the artist Yahya Al-Fakhrani, directed by the actress Hala Khalil.